My intention to play in The Lew Hoad Memorial ITF Veterans Tournament came from my brother Robert’s connection with Lew & Jenny in the early seventies when he used to head south during the European winter to coach at their facility that was the only tennis centre in that part of Spain at the time.

We flew into Malaga and headed to Gibraltar for a few days after the flight before heading back north to Mijas where the Hoad Tennis Centre is located. 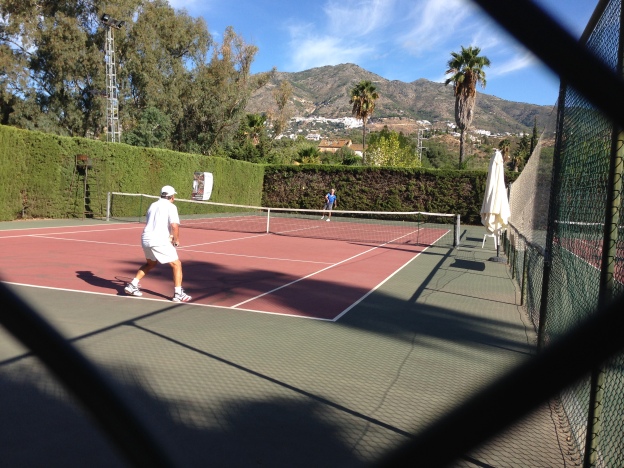 Court 2 with Mijas in the background

The tournament is a level 3 ITF grade event and entries from locals have been effected by the ITF requirement to register as an iPin competitor. It was necessary to bring some age groups together and play round robin events because of the small field. The 60 Mens was the only event to be run as a knock out event. 65 had four entrants and run as round robin. 70 & 75 were joined and played as two pools of three.

Sunday 13th I used as a practice day and was able to find three British guys having a hit and joined them to get used to the concrete surface. Monday I had a bye but went down to the courts to observe the other guys playing their singles, in other words checking out the opposition. We then had a drive around the area and up to the village of Mijas.

Tuesday 15th My match against Claude Dehon was scheduled for 10.30am. Claude now lives Lyon, France, worked for the Atomic Energy of France and was stationed in Tokyo as their Asia manager for a number of years. A nice guy and played a reasonable game but the age difference put him at a disadvantage; I won 6-3 6-3.

Jenny was playing in the Mixed Event with an English partner

Wednesday 15th My second singles was also scheduled at 10.30am before the real heat of the day. Hermann Linke from southern Germany another 75 year old did not cause too many problems and I beat him 6-0 6-4 after I lost my way for a while in the second set.

Thursday 16th The organizing committee agreed to bring the final forward from Saturday to Thursday because I had to fly out to Croatia early Friday. Bjorn Bech won the other round robin and in pre match discussion he indicated the he had recently won home Danish 70’s championship. I got away to a good start and lead 5-2 before dropping three games in a row to level at five all but then held serve and broke him for 7-5. I hit the ball much better in the second set and won 6-1.

Jenny Hoad presented me with a white quality towel embroidered with the tournament details. 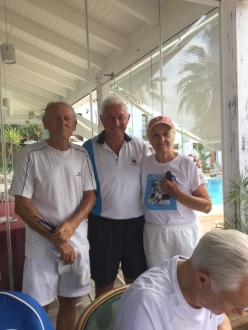 The Lew Hoad centre is showing its age after 50 years however the new owners have renovated the dining & bar area and upgraded the toilets & showers. The show court has been converted to four padel courts and an additional two have been installed alongside. 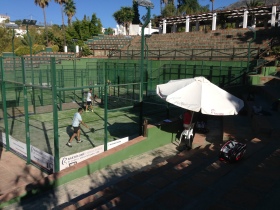 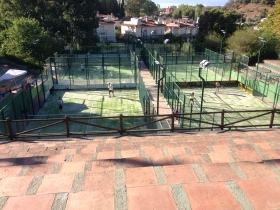 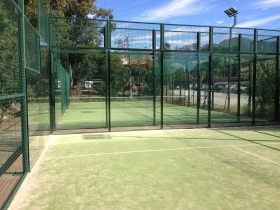 The Plexicushion courts have lost some appeal with competition from three clay court complexes nearby. Many British as well as Europeans have units here and spend a month or two in Spain each year. It was easy to make conservation with many of the players as they all spoke English and one guy I was talking to was the chairman of selectors for Great Britain.

The centre was still trading on the Lew Hoad name and there were many prints of Lew and old wooden rackets around the club. All in all a very nice stay around Mijas. 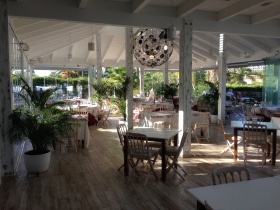