During our Florida travels I decided to play a Seniors Tournament on the west coast. I looked on the USTA web site for a tournament around the end of January and found one at Naples. In order to enter I registered with the USTA and obtain a player number. I sent an email to the tournament director looking for a doubles partner and he gave me Dave Resley as a possibility. I made contact with him to seal the deal and obtain his Player No. and then entered online.

I listed my performances and the grading committee gave me a 5 to 8 floating seed. There were 16 seeds in the 52 player draw for the 70 singles.

The tournaments full title is;

Sterling Oaks is a gated community with 12 Har-Tru courts. Three other gated communities are being used each with around 7 courts.

(Har-Tru is a surface developed for Florida and is a compound about 1” thick laid on a rock & sand base and has a fine layer of green coloured sand on top to allow players to slide. An underground watering system keeps them moist all the time and saves around 50% over sprinkler systems.) 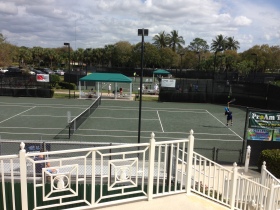 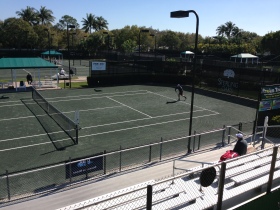 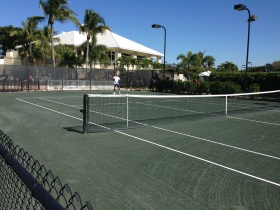 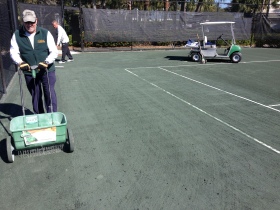 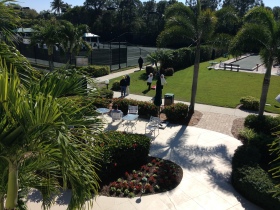 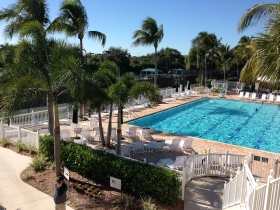 We arrived at lunch time on Saturday and I have an hours practice with Dave at another gated community. I received a bye in the first round, so drove to Sterling Oaks to register and drove to Heritage Bay about 16 miles to the east to check out the courts. 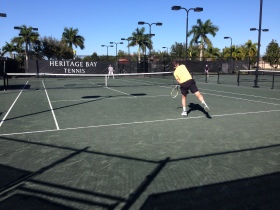 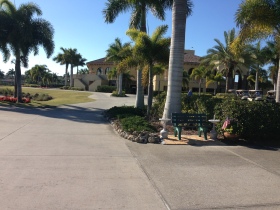 On the way back I dropped into “The Club at Mediterra” to watch who I might be facing on Monday. Tom Cocagne won his match 6-1 6-2 and plays lots of drop shots. 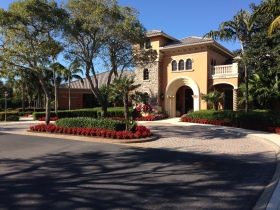 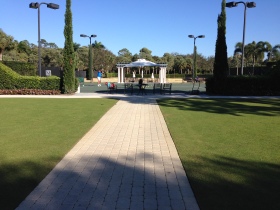 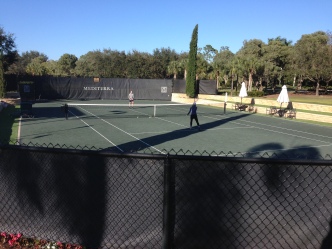 Monday I drove out to Heritage Bay to play Tom at 1pm. I struggled with my serve and found the high bounce made it difficult to keep the ball in play. He hit exceptional drop shots and could play them off both sides and they would only go about 3’ past the net.    I dropped my first serve to hand a 2-0 lead to Tom before I recovered to 4 all and broke to win the first set 6-4. Things were going OK at 3-0 in the second set and then I lost the next 5 games. Dig deep time & I got back to 5 all and the tie breaker at 6 all. My thoughts were I do not want to play another set, so eventually won 7-5. A lucky first round escape, I need more court time.

Tuesday, my opposition a Swede Evert Jonsson had beaten my doubles partner 6-0 6-0 and Gary Wilson from DC 6-1 6-0. I won the toss and elected the serve and then promptly lost my serve to hand his an easy start. Playing from behind did not help me to settle in and I lost the set 6-3. Games just disappeared in the second set and I was still over hitting and lost 6-1. A very disappointing and poor performance from someone who was given a seed and a good draw.

I later paired with Dave Resley against two ex Swedes and we seemed to have things under control with one break of serve in the first set. Unfortunately I dropped my serve at 5-4 and we went on to a tie-breaker. Bad news, we lost 7-1 in what was a mistake ridden game from us but well played by our opponents. We recovered in the second set and won 6-4 to force a ten point super tie-breaker. Down 3-0 but got back to 3 all and played point for point until 6 all when we hit four balls long to gifted the match to the Swedes.

We have now entered the consolation doubles to get more time on court.

Wednesday, no play due to a full days rain and hopefully we can start again tomorrow. 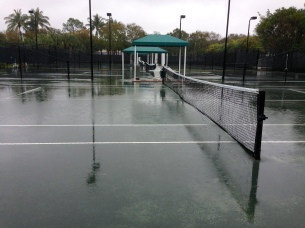 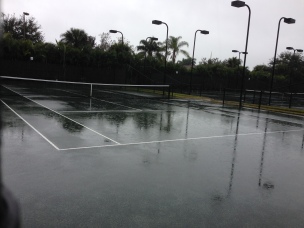 Thursday was a wet day so Gae & I went for a drive north along the coast to Fort Myers and return via US41. At 3pm I went up to Shadow Wood Country Club and gave Dave a hit for an hour.

Friday was fine so Gae & I drove south to the old village of Naples and after lunch I went over to Sterling Oaks to see how they were progressing with the quarter finals. The guy that beat me Evert Jonnson had taken the first set 6-3 off the number two seed Fred Drilling and I watched the second set which Fred won 7-5. I later learned that Evert won the third set 6-4 to progress to the semi. 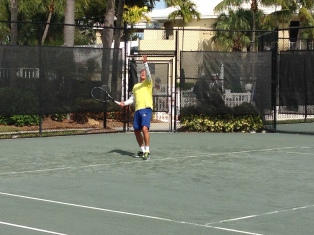 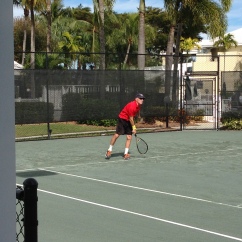 Hugh Thomson who I lost to in Croatia was playing a tall left hander Steven Gottlieb from Georgia, was down 6-3 but recovered to win the second in a tie breaker before Steven retired with an injury. 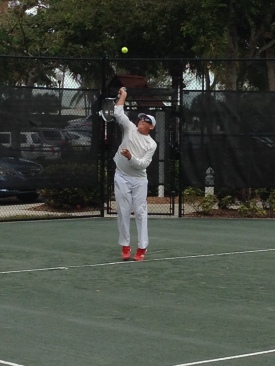 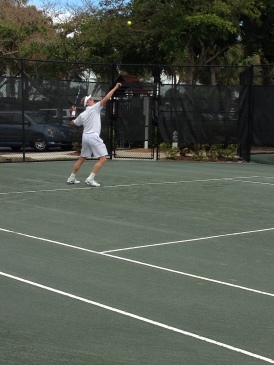 An ex player of Roberts vintage Hank Irvin was playing up on court 3 against Owen Robertson from Florida but lost 6-4 6-1. I ducked off at 2.45 to have another hit with Dave as we were not drawn in the consolation doubles.

Saturday we headed east to Miami but a check of the records showed that Hugh Thomson had taken the first set 6-4 against Evert Jonnson and then Evert retired injured. Meanwhile number one seed Les Buck made his way to the final with a win 6-4 6-2 over Owen.

The final was played on Sunday with Hugh Thomson defeating Les Buck in a three setter 4-6 7-5 6-4.

It was a great experience to play on the Har-Tru Courts in these gated communities on the Gulf Coast of Florida even if I did not have much success. 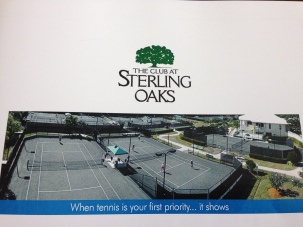 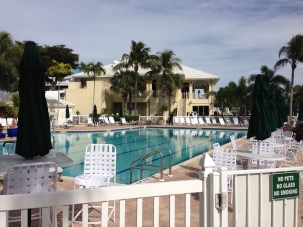